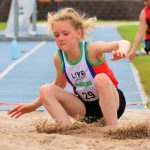 Having finished 2nd to Edinburgh in the first Forth Valley League match in May, Team Borders went one better in Match 2 on Saturday at Grangemouth, winning the match by a decent margin with 329.5 event points and going top of Division 1 thanks to Pitreavie with 292.5 event points pushing Edinburgh, with 277 event points, into 3rd in this match. Going into the final round in August, Team Borders lead the closely fought contest on 11 league points, with Edinburgh on 10 points, and Pitreavie on 9 points.

There were no fewer than nine ‘A’ event wins for Team Borders and three of these came from debut boy Filip Kubicki, a very recent recruit to Gala Harriers after the last Tweedbank Open meeting. Filip kicked things off with a new league record of 12.4s in the U13 Boys 75m Hurdles, then jumped out to 4.81m to win the long jump, and completed his hat-trick with a 200m victory in 26.2s.

The remaining four ‘A’ wins came in the field events. Kate Harvie (Moorfoot) equalled the league record in the U15 Girls High Jump with 1.60m with Debbie Harris (Chirnside) making it another double win for Team Borders by taking the ‘B’ win with 1.35m. Grace McWhinnie (TLJT) took the U13 Girls Long Jump with a distance of 4.37m to add to her ‘B’ win in the 200m in 28.4s. Charlie Robbie (TLJT) won the U11 Boys Shot Putt with 7.02m and Harris Ross (Chirnside) won the U13 Boys Javelin with a throw of 29.22m. 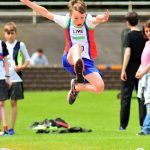 Rowan Hulme (Gala) ensured there was a third double-win by taking the ‘B’ win in the U13 Boys Long Jump and there were further ‘B’ wins for Lilly Jackson (Moorfoot) in the U11 Girls 800m, Archie Dalgliesh (Gala) in the U11 Boys 800m, and Cameron Rankine (Gala) in the U15 Boys 800m.

Special mention to a couple of late recruits to the team who ensured a full turn-out and maximised Team Borders’ event points, which at the end of the season could prove crucial if two teams end up level on match points. Ritchie Mitchell (Gala) came into the team for only his second race of the season after showing his well-being at the Borders Schools two days prior. And Daniel Antrobus (Gala), whilst admitting himself to being not the quickest of 200m runners, showed fantastic team spirit in taking on the U11 Boys 200m ‘B’ race and picking up another three event points for the team. The same can be said of Elena Lee (Moorfoot) who jumped off her Beltane cavalcade float sharpish for an immediate dash from Peebles to Grangemouth in time for the U13 Girls 800m. Despite a rather unorthodox race preparation as a Lady of the Beltane Court and having to be woken from the car 10 minutes prior to her race after it was brought forward, she still collected eight team points. Well done all.